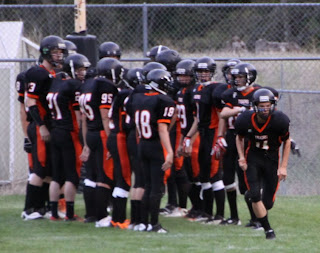 John Wayne said in his character role of Sergeant Stryker "Life is tough, it's tougher if you're stupid." As a matter of fact, I have that character's picture and saying on the shop wall. Life is tough even if you aren't stupid...very tough some times.
There are moments in our lives when things don't go quite the way we would like and as we grow older the level of tough times changes. As a kid, a tough time might be parents not buying the toy or cereal you want or getting told no when asking someone for a date.
As we mature tough times become a bad grade in a class or losing a very important game. While these things seem like tough times at that moment and stage in our life we usually get over them and then forget them completely.
Looking back on my life I've had a few tough times, the biggest was losing my father. He was too young to die, but my faith in God helped me through that tough time. That first year saw me having to stop work and just cry. One of those times was doing spring work, our favorite time of the year. I missed having him there.
My tough time now is being a parent. I wrestle with things like handing out responsibility to Dillon and Logan while trying to make sure they still get to experience what kids should. With Dillon being a senior the tough time is Rhonda and I making sure that we do are part to make sure he is ready for the next step in his life, most likely college.
However, my tough times are nothing compared to what my oldest son Dillon has gone through.
As we go through grade school and high school there is a certain amount of growing pains that have to take place and those growing pains help to make us the people we are. They shape us and form us into, hopefully, a good person. 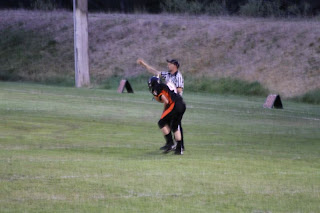 Dillon has had more than his share of growing pains. It almost seems that he hasn't had a good high school experience. Last night's experience has compelled me to write this. Dillon broke his wrist playing football.
Maybe Dillon isn't the most gifted person in athletics, but he hasn't really had the chance to grow in that area. In Jr. High he was dog-piled on by upper class-men which separated his shoulder. He played two games at QB and on defense and did well, but that injury required surgery during his sophomore year, missing a big share of hoops. He also missed playing football his junior year. 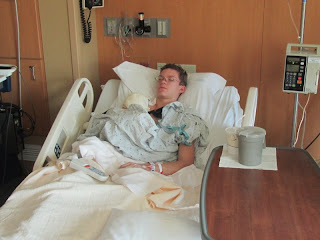 During basketball last year he played a game and not even a quarter when his ankle was broken. He was in position to take a charge and it was a freak accident. I equate it to the Lawrence Taylor/Joe Theismann incident...just a freak accident. He missed almost all of basketball. He did do track, but his ankle was stiff and he started doing it towards the end of the season. 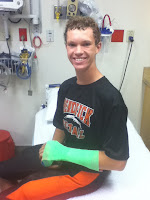 Last night Dillon broke his wrist and we are still up in the air as to the extent of damage. This was another freak accident where he went out for a pass, landed, and the defender came down on his arm wrong.
I can't imagine the growing pains he has and is experiencing. Both Dillon and Logan would get up in the morning, service the combine, work all day, and then go to conditioning getting home around 9 pm. Once, they didn't have time to change so they did running in jeans and boots. They both have a great work ethic. 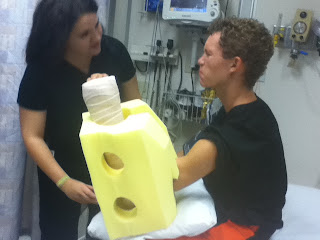 Here it is, his senior year and he can't finish football and we don't know about the hoops season yet. He has put in the work to be a good student athlete, both in the classroom, weight room, and in practices but he won't see the fruition of his dedication. He has stood on the sidelines cheering on his teammates. All of this work and dedication and he won't probably receive a letter in football. BIG GROWING PAINS. 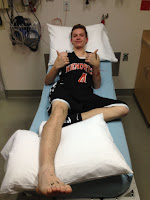 This is what gets me as a parent...he is always positive and has a smile on his face.
While these are more severe growing pains for Dillon, as a parent I am dealing with my own growing pains. As a parent I wish that is was me that could be hurt so that he could experience the fun of sports and a great senior year. These are times as a believer in God that I question the "why."
When my father passed away at a youngish age I questioned the "why." When things happen in the world I question the "why." Now, I am facing my growing pains not only with Dillon's ordeals but God.
I know things will turn out alright and Dillon will be a good person. I know God is there looking out for us doing our jobs in a dangerous profession. I know He is there when we leave the farm to go to town or to travel. And God does have a plan. 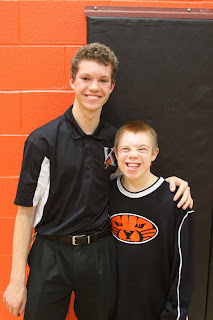 I am proud of Dillon's work ethic and especially his moral ethic. Watching him as an assistant coach for Jr. High basketball and working with a player who has Downs Syndrome is something I can be proud of. Maybe I'm having the growing pains instead of Dillon?
However, I'm a parent who is so saddened by his son missing out on sooo much. Maybe the things I am hoping for him are not the lessons or things he is supposed to experience.
With that said, I will still pray to God for support. I will still pray to God to look after my family and others. I will still pray to God to help us do the right things.
I will pray to God to help protect Dillon. And when I look back, He did in a big way. Dillon is here. Dillon was born during the flooding of 1996 and Rhonda had to have labor induced. Dillon had the cord wrapped twice around his neck and I remember trying to reassure Rhonda that everything was fine when she asked how it was going (I need to work on my poker face). 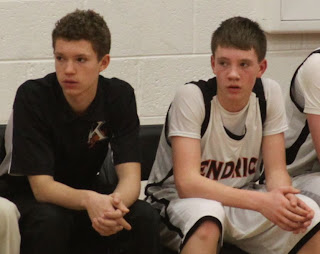 God has been there because we have Dillon with us. Dillon, who is a great big brother and role model for me and others. Thinking about that helps to make MY growing pains hurt a little less. I hope that God and others can help Dillon get through his.

Posted by UnmannedFarmer at 10:30 AM 2 comments: